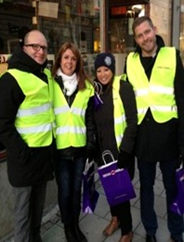 International insurance company RSA’s Scandinavian companies (Trygg-Hansa in Sweden and Codan in Norway and Denmark) have been active in road safety for many years. They organise the annual 'Refleksdag' (Reflectors Day) across Scandinavia and have run the ‘Skadestop’ (‘Stop the Claims’) campaign in Sweden since the early 1980s and Denmark since 2011.

Through Skadestop RSA establishes partnerships with commercial customers – mostly logistics companies – and helps them develop action plans to improve road safety and reduce the chances of their staff being involved in a road crash when driving for work.

Refleksdag is RSA's major road safety campaign to engage the public. Night time visibility has been the focus of RSA’s public-focused road safety work in Sweden, Norway and Denmark since 2008 and the concept of Refleksdag began in 2011.

On Refleksdag tens of thousands of reflective items of clothing and accessories are handed out by RSA staff and volunteers at company events, in schools and in town centres. The Day is supported by various promotional activities run by RSA’s regional companies, which aim to reinforce the importance of visibility around traffic:

Overall, around 180,000 reflectors are handed out across Sweden, Norway and Denmark on Refleksdag. Between Refleksdag and Skadestop, RSA’s companies in Scandinavia are able to engage hundreds of thousands of potential customers while positioning themselves as a business that is passionate about road safety.

-   Find out more about RSA’s work internationally.
-   Find out how you can organise a similar event on our companies page.
-   Read about other events through our Road Safety Week map.